* Aspire 16 Rox will be competing in the Open Division at the 2014 Girls JNVC in Minneapolis, MN from 6/30 thru 7/3 based upon a Bid earned at the Show-Me National Qualifier in Kansas City, MO

* Aspire 15-Black finished 10th in the National Division at the 2013 Girls JNVC in Dallas, Texas.

*  Aspire 14 Black was the NATIONAL CHAMPIONS of the 14-American Division at the 2012 Girls JNVC in Columbus, Ohio.

*  Aspire 13 Black competed in the 13-American Division at the 2011 Girls JNVC in Atlanta, Georgia.

*  Rachael verbally committed to attend and accept a volleyball scholarship in 2016 for the University of Florida Gators in Gainesville, Florida

*  Member of the Varsity Team (Middle Blocker and Right Side) with a record of 30-11 and finished tied for 5th in the State Tournament.

-  Member of the National Charity League (Ahwatukee Chapter), donating a minimum of 20 volunteer service hours per year. Elected as the Class of 2016 Grade Level President for the 2013-14 year 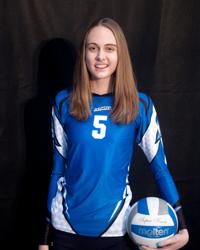